in Itinerari in Campania

History of the excavation of Oplontis

History of the excavation of Oplontis

The first official excavation of the site of villa A ( locality Mascatelle) in Torre Annunziata began in the 18th century, when a cuniculus was excavated from the Conte di Sarno canal. It can now be seen at the south boundaries of the archaeological area.
The excavation work, carried out by the military architect Francesco La Vega was interrupted because of the mephitic air and the gallery was closed. In 1839 a small open-air excavation was begun in the peristyle area and in the servants’ quarter and the fountain of the garden was found.
From here, narrow cunicula were excavated reaching the east area, which was constituted by a monumental passage with masonry benches and by a parallel portico. In 1840 excavations were suspended because of lack of money. The State acquired the site, recognising its archaeological importance.

Systematic excavations of the villa, apart from some accidental discoveries nearby via Murat, began in 1964: they were carried out according to modern criteria and with the help of the existing documentation, so the progressive reconstruction of elevations and roofs and the immediate restoration of paintings and floors were allowed.
In 1974, 250mt. far from the east side of the Villa A or Villa of Poppea, during the construction of a school building, remains of another noteworthy building came to light. It was arranged around a peristyle on two levels, the villa B or Villa of L.Crassius Tertius, on the back of which lie other buildings, separated from the complex by a road.
The excavation of this complex, as well as the one of the Villa A, is not completed yet, obstructed by the modern urban contest.

in Archeologia Napoli / Itinerari in Campania 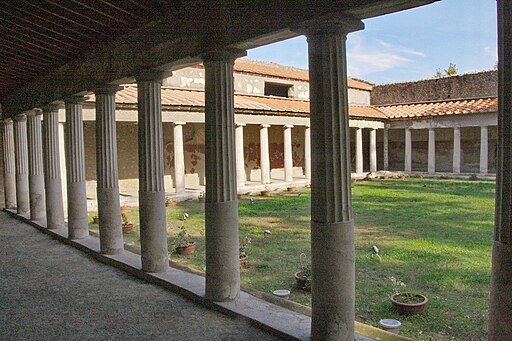