You are in » Home » naples square

Visit Naples is in the region of Campania in Southern Italy, about 2-hours south of Rome

Visit Naples, on the coast on the northern edge of the Bay of Naples, one of the most beautiful bays in Italy. Its harbor is the most important port in Southern Italy.

Visit Naples..it sits on the coast on the northern edge of the Bay of Naples, one of the most beautiful bays in Italy. Its harbor is the most important port in Southern Italy.

Naples, Napoli in Italian, is the third most-populated city in Italy and the biggest city in Southern Italy. Its name comes from the GreekNeapolis meaning new city.

Its close proximity to many interesting sites, such as Pompeii and the Bay of Naples, makes it a good base for exploring the area. Naples is a lively and vibrant city, full of wonderful historical and artistic treasures and narrow, winding streets with small shops, making it worth at least a few days visit. 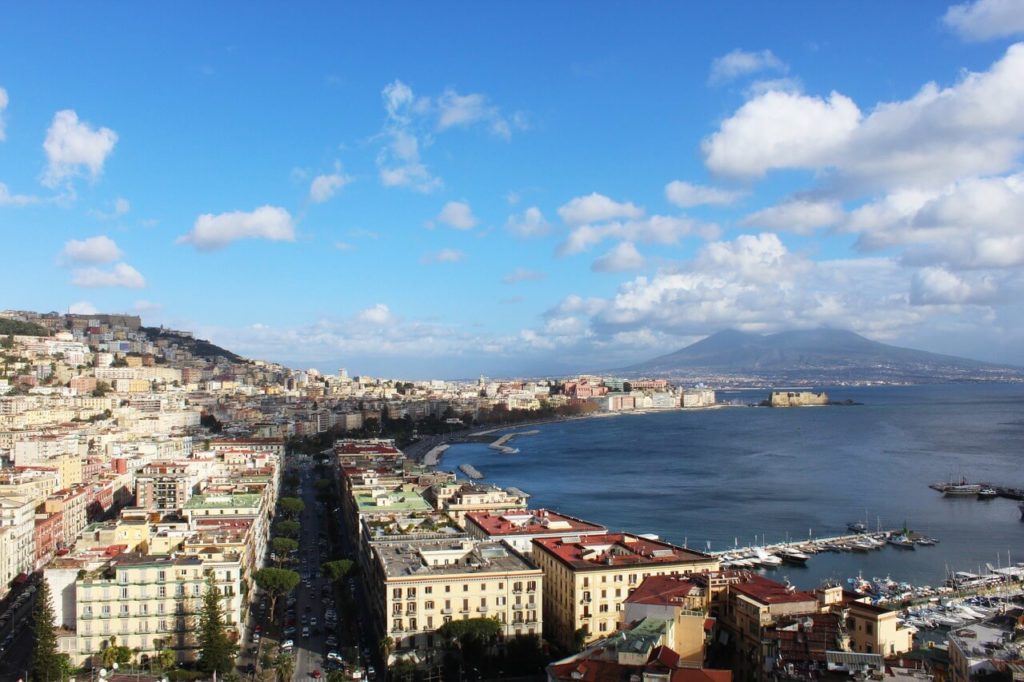 B&B The Fauno is just 24 km from Naples, you can easily reach by car (25 min.) or with Train of the Circumvesuviana in 40 minutes.

You can book your accomodation online with immediate confirmation by clicking here and choosing your room. 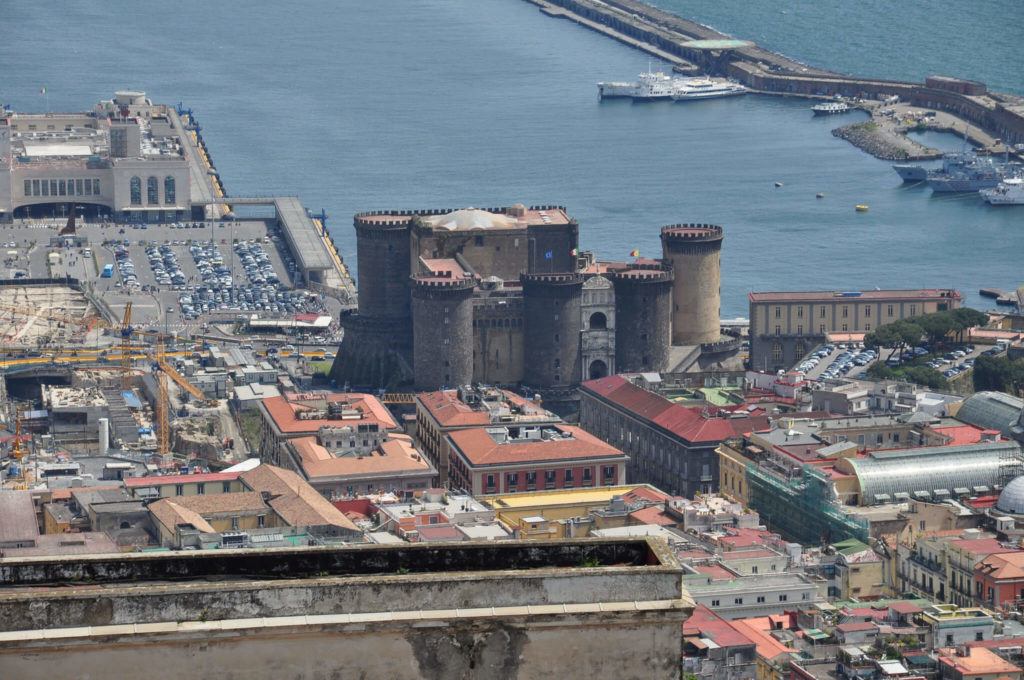 Many of Italy’s world-famous dishes like pizza and spaghetti were born in this region, so it’s no surprise that Naples offers some of the finest and freshest food in all of Italy. Mouth-watering pizza is made with fresh mozzarella di bufala and fresh seafood is prepared to perfection. Naples is also home to Italy’s best coffee. Espresso bars are everywhere and patrons can be found enjoying coffee at all hours.Try a steamy shot of fragrant espresso at the late 19th century Gran Caffè Gambrinus with a decadent pastry. It is an experience you won’t soon forget.

Naples is an exhilarating mess of Unesco-listed historic buildings, citrus tree-filled cloisters and electrifying street life. Once the heart of Roman Neapolis, the historic centre is a warren of narrow streets, which open up to an Imperial 18th-century seaside promenade with romantic views of Vesuvius.

With the warm weather and Maggio dei Monumenti cultural festival in full swing, May and June are great months to visit. Alternatively, visit in September or October and catch the infamous pizza-making competition, Pizzafest. 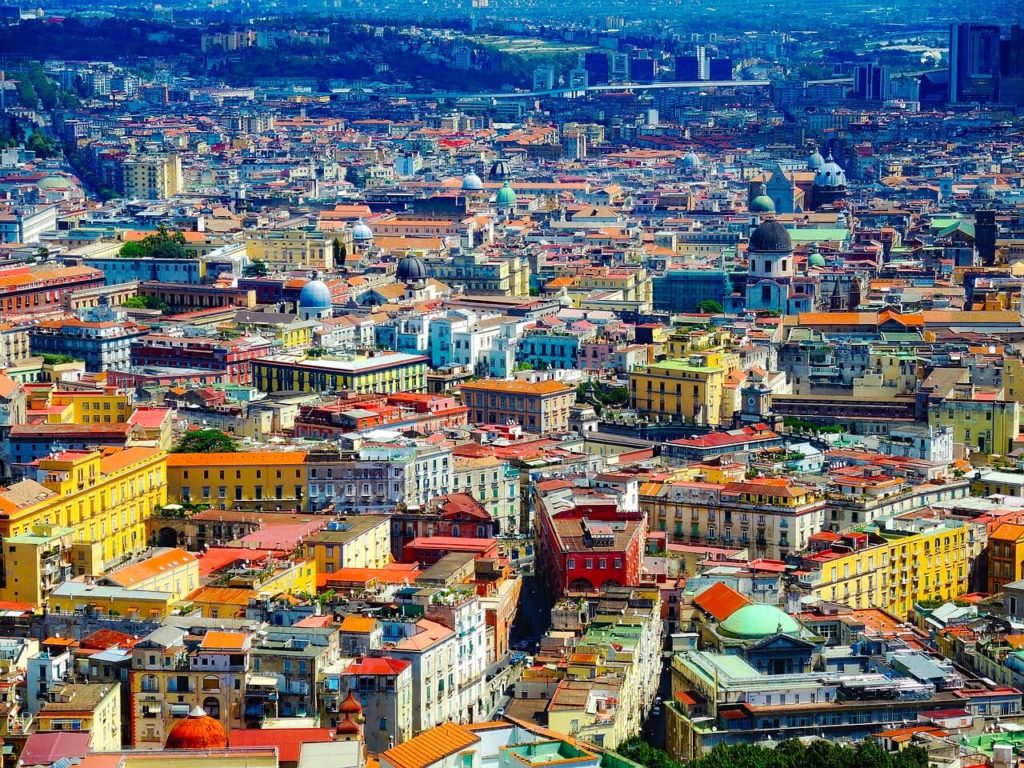 Be forewarned: Traffic in Naples may be extremely heavy, just to compare: very similiar to New York’s. Traffic around the train station is nuts. Before attempting to cross the street, observe the locals. The idea is to spot a gap in the traffic and start across and hopefully people will stop.

There are several ways to see Naples and the surrounding area. These include by taxi, train/subway, bus.

Taxis are the quickest way to see Naples, but also the most expensive. Before getting into a taxi, make sure it is licensed. Licensed taxis will have a city crest on the door and a taxi number. Also, make sure it has a meter. By law, licensed taxis must display a list of pre-agreed fares in a number of languages (Italian, English, French, German, Spanish). Check the presence of such fares and agree to them before starting the journey.

You will be surprised how easily you can get around by foot, too. Interesting spots are almost on every corner and most distances – especially in the (historic) centre – are small and can easily be walked in a matter of minutes.

By public transportation on land

It is fairly difficult to get a clear picture of the public transportation system in Naples, since different lines are operated by different companies. Nonetheless, one can buy a daily pass for € 3,60 valid on all vehicles. With a € 1,20 ticket, instead, you can travel for 90 minutes on as many lines as you want (Bus, subway, funicolare). This pass is under the Unico Campania  banner which has great integrated maps of the various lines in the city on their website.

There are three different regional train services that operate in Naples and the surrounding areas. They are listed here:

In Naples, some may find the actual conditions of many buildings and streets, and the rampant graffiti, off-putting. Others claim this is “the immense character and culture of Napoli…and even the dirt and grime has its own flavor…a Neapolitan recipe for reality, and great fun”. Naples’ peculiarity is that the city centre is not the elegant part of the city. Just do not expect in the city centre the pristine conditions of many other major European cities, since the historical centre, unlike most European cities, is not the “downtown”. If you want to visit the elegant part of the city, you can walk around the wonderful lungomare (the Riviera di Chiaia or Via Francesco Caracciolo), and visit Via dei Mille and Vomero hill (main shopping areas).

Most sites in Campania (including Pompeii) accept the Campania Card for tourists (free entry). Some cards also include a pass for the local public transportation.

Pizza comes from Naples. Look for pizza margherita, the original one, with tomato, basil and fresh mozzarella toppings. Eating a pizza in Florence or in Rome is not the same as eating it in Naples! In Naples every pizzeria makes a decent pizza. Some places display the label “Vera Pizza Napoletana” (“True Neapolitan Pizza”) with a Pulcinella mask baking a pizza in a stylized Vesuvio, which indicates that the pizzerria follows the standards of The Naples Pizza Association.

If you want to try “the” authentic Neapolitan pizza, go to Pizzeria Brandi, (Chiaia Str. closer to Piazza del Plebiscito), where the pizza margherita was born (a stone is exposed outside the restaurant explaining the history of the first pizza). Today the best choices would be Da Michele (Via Cesare Sersale, 1–3) or less enjoyable Trianon a Forcella (Via P. Colletta 46, just in front of Michele). These pizzerias make the authentic pizza, but be careful because they are located near Forcella which is not the safest part of Naples — although generally OK during the day. In particular, Michele has a unique feature: they only do pizza Margherita or Marinara (just tomato, garlic and oregano, and a splash of oil, of course!). They say that these two kinds are the original pizza: if you add too much toppings you’ll lose the real taste of the pizza, which should be very simple, made only of a good, thin base, good tomatoes and fresh mozzarella. Note that there is usually a queue at these restaurants: at Da Michele, get a numbered ticket from the waiter on the door when you arrive.

Some other places that are very popular among the Neapolitans are almost all the pizzerias in Via dei Tribunali, in particular Di Matteo (# 94), Il presidente, Sorbillo, and his sister, a few doors away (informally known as “la vecchia” (the old lady), from the owner of the pizzeria, a very small place with only 4 or 5 tables, that looks like a pizzeria of 50 years ago — very hard to find, but it’s worth it!)

In general it is easy to find a good pizzeria, just look for one without tourists!

Neapolitan cuisine in general features much seafood, befitting its status as an ancient and still functioning port. You will find many sauces based on garlic sauteed in extra-virgin olive oil, tomatoes, and local red wines. Some of the more popular sauces are arrabbiata (“angry”) or fra diavolo (“Brother Devil”), which means they will contain hot pepper. It’s great cuisine. Enjoy!

Mozzarella is also typical of the region, you should not miss the opportunity to taste the fresh real one!

The city and region are also famous for their pasticceria (pastries), including:

Among the best places to try these pastries are:

Naples has a divergent distribution of richness. Keep in mind that the city centre is not the “rich part” of the city, so the historical centre may be somehow gritty and in some parts impoverished. Naples’ bad reputation regarding safety is mainly consequence of stereotypes, since the city’s security level is actually comparable to any other European big city (Barcelona, Marseille, Amsterdam,…). The police and the Carabinieri fight the local mafia (Camorra) strongly. In any case, it posseses little to no threat to tourists, but petty thievery and muggings definitely happen, but yet again, it is no more other comparable European city. Be watchful, but not so much to ruin the magic of one of the most creative, unique and original city in the world. Of course, avoid empty streets and dimly-lit alleys at night and keep your wits about yourself. People in Naples are extremely nice and gentle, and often people are helped by Neapolitans to find some gorgeous attraction not shown in the tourist guide.

Whoever comes to Naples historical city centre has to take some generic precautions:

in What you see

Reopening of Pompeii excavations from 26 May 2020, book your room near the archaeological site now! Mag 22nd, 2020

This site uses cookies to improve the browsing experience of users and to gather information on the use of the site. By clicking on 'Accept', continuing browsing or scrolling this page or ignoring this banner you consent to the installation of cookies.AcceptCookie Policy